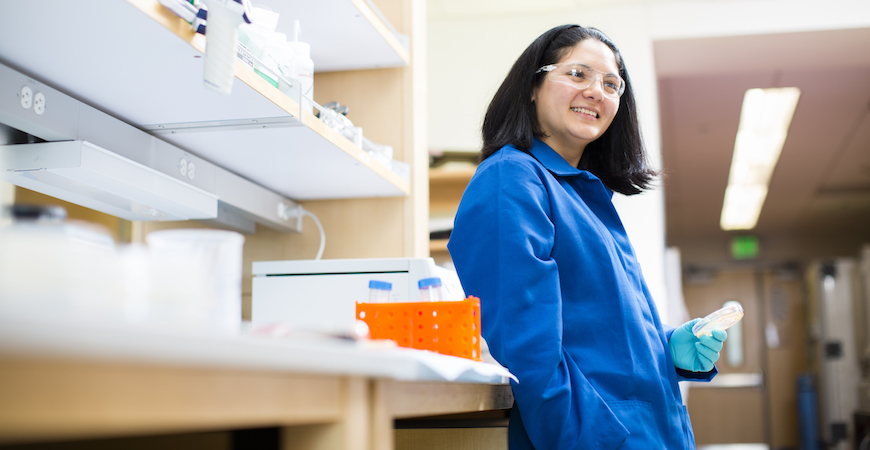 Professor Clarissa Nobile is changing the way we look at microbes. She wants to understand them as they’re found in nature, not as they exist in the laboratory. And she was just awarded a five-year, $1.89 million grant from the National Institutes of Health (NIH) to bolster her efforts.

Nobile received the Maximizing Investigators' Research Award (MIRA) from the National Institute of General Medical Sciences (NIGMS). Known as the Outstanding Investigator Award, it’s the first of its kind ever awarded to a UC Merced faculty member.

It’s yet another mark of distinction for Nobile, who became UC Merced’s first Pew scholar in 2015, and this year was named part of the Merced Sun-Star’s first 20 Under 40 class.

“The MIRA gives investigators more flexibility to take risks and explore,” Nobile said. “It’s an investment in the investigator, not a specific project.”

To those unfamiliar with how research funding works, that might not sound like a big deal. But this isn’t how funding typically gets doled out.

Funding agencies prefer to back projects with narrow aims and clearly defined outcomes. Open-ended exploration is seen as too risky to merit investment. According to Nobile, this has its drawbacks.

Microbes Team Up to Form Biofilms

What do you see when you imagine a microbe?

Most people picture a lone, rod-shaped cell — perhaps with a flagellum attached — swimming frenetically in a drop of murky water. This vision of the solitary microbe is a false construct, an anomaly emerging from a long history of studying bacteria, yeast and other microscopic organisms under artificial conditions.

In nature, microbes are anything but solitary. They aggregate to form biofilms — crowded microbial communities that communicate, collaborate and compete. As biofilms, they secrete chemicals that protect them from the external environment. But these same compounds cause them to stick together, literally linking the fate of the individual to the community. 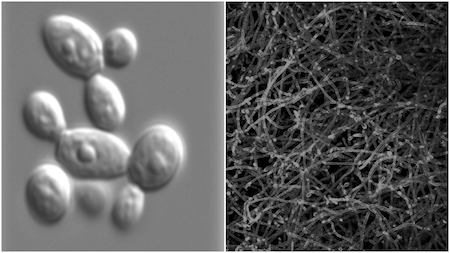 Until recently, scientists were fixated on the free-floating cultures they grew in labs. They studied microbes in their planktonic form to the exclusion of biofilms. They were just easier to study. As a result, little is known about microbial communities. How they form, how they’re maintained and how they differ from their free-floating counterparts remain open questions.

But biofilms are everywhere. Single-species biofilms like those formed by the yeast Candida albicans are the main cause of the common yeast infection. Multispecies biofilms are responsible for many of the infections people pick up in hospitals, with pathogenic biofilms forming on implanted devices like pacemakers and heart valves. There are even biofilms that form on our teeth and comprise many thousands of microbial species. And that’s just dental plaque.

In most cases, the medical and ecological significance of biofilms is just beginning to be understood, largely because studying biofilms required a new approach.

“People used to study one gene at a time to understand what that one gene did,” Nobile said. “We take a systems approach. We study the networks that control the genes that lead to the development of microbial communities”

Her lab found that the biofilm form of Candida produces proteins that free-floating Candida do not, demonstrating that biofilms not only manage their genomes differently, but also suggesting that these yeast somehow “know” when they’re members of a community and “behave” differently in that context. Nobile also showed that even distantly related microbes, like bacteria and yeast (which are much more closely related to animals than bacteria), can form biofilms together.

“This means different kingdoms are somehow communicating with each other and forming communities,” Nobile said.

Nobile also believes that studying biofilms might provide insight into how life went from single-celled to multicellular.

Cell-to-cell communication and cell specialization were once thought to be hallmarks of complex multicellular life. But since biofilms seem to exhibit many of these same traits in species considered more primitive, they may provide insight into how multicellularity emerged in the first place.

“Very little is known about how we became multicellular,” Nobile said. “Studying microbes, which have been on this planet for billions of years and have had billions of years to evolve, might be the place to figure that out.”