A biology professor at the University of California, Merced, discovered mechanisms that allow a potentially fatal biofilm to spread and resist drugs. 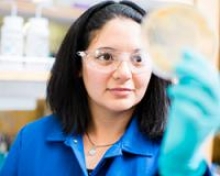 The research was published last month in mBio, an open-access online journal by the American Society for Microbiology.

“There are no known biofilm-specific drugs on the market today for any microorganism,” Nobile said. The fungus is naturally found in the human gut and can cause yeast infections and oral thrush. Infections can also be caused by implanted medical devices, which provide surfaces for biofilms to form. The infections can be life-threatening.

Nobile pinpointed four core proteins — all members of a histone deacetylase complex — that control how the biofilm forms, and learned what happens when they’re changed.

Mutations in the genes encoding each of these four complex members cause the biofilm to be more resistant to agitation and less likely to spread to other parts of a body, and also more resistant to drugs. Drugs that inhibit histone deacetylase are most often used to as mood stabilizers in psychiatry and neurology, and are also being tested to combat cancer, Nobile said. It’s not yet known if they could be used against biofilms and whether there’d be side effects.

Nobile’s interest in biofilms began just as she entered graduate school at Columbia University. Her mother became extremely sick with a biofilm infection. Nobile was surprised to learn there weren’t any reliable treatments and generally little was known about it.

She received her Ph.D. in biology from Columbia in 2007 and served as a postdoctoral researcher at UCSF until she was appointed to a tenure-track position at UC Merced in January 2014.

The opportunity to forge innovative collaborations with UC Merced’s ambitious faculty members was among the reasons she took a position with the campus. Nobile works with Professor Miriam Barlow, who studies antibiotic resistance, and Professor David Ojcius, who studies infectious diseases, including valley fever.

With advances in research and technology, Nobile is looking at the microbiome — all the microorganisms, good and bad, that live within the human body. Increasingly, research is showing what an important role the microbiome plays in health and disease.

Microbes are able to communicate with each other, and Nobile believes these interactions will shed more light on infections and diseases.

“In reality, these microorganisms exist in complex systems,” she said.